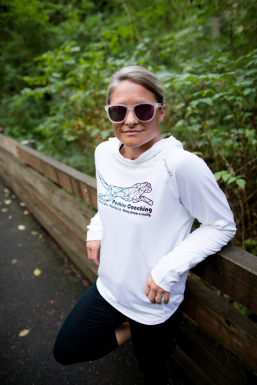 Hi I'm Ruth! I grew up out in the country on five acres with two older brothers. As the only girl I was quite a tomboy and did all the active things outdoors. I also did well in school and worked hard to keep straight A's. In middle school when all my friends joined the track team, so did I. Little did I know this was the beginning of a lifelong love of running!

I ran the 400 and 800 in middle school and let's just say I made an awesome caboose in most races. But despite my lack of speed, I enjoyed the team atmosphere and continued to develop my love for running into high school. There I discovered my true gift was distance running and worked my way to State in the 2 mile and Cross Country multiple times. I loved working hard and ran respectable times, but I didn't earn any college athletic scholarships. That didn't stop me from walking onto the Cross Country and Track teams and earning a spot on the traveling squad anyway though! I competed in the 10.000 and 5,000 along with the athletes on scholarship and earned some top places at the regional and national levels.

After college I continued running competitively and tried out the half marathon and marathon distances, finding immediate success. During that time I worked as a personal trainer at a studio in the city for several years before moving to the suburbs and finding work at a physical therapy clinic. I thought it was totally normal for someone to work their job around their running schedule, ha! Although running was going great, my husband and I decided we wanted to start our family. I ran through both my pregnancies until about 30 weeks and recovered quickly after both deliveries (do not read this as medical advice - this was only my experience). After I was done having children, I transitioned back to personal training and got back into more serious running again, I was running faster than ever. Long story short, my first marathon back took my running career from good to elite and my next marathon qualified me for the 2012 Olympic Trials. A dream I didn't even know I had came true!

As my running career exploded, so did my passion for coaching. I earned my USATF certification and worked hard to lay the foundation to start my own coaching business. Coaching runners was a dream I had since high school and finally in 2014 I officially launched Perkins Coaching. During this process I continued fiercely pursuing my running goals and qualifed for the 2016 Olympic Trials. I have won many local races, ranked top 10 in multiple national championships and competed in both the 2012 and 2016 Olympic Trials Marathons. I'm still chasing my own running goals alongside my athletes and you can trust that the coaching techniques I use are the most advanced and trusted techniques available. Here's to training wise, running fast, and making dreams a reality!

Ready to Schedule a Consult?

Recommend this page on: